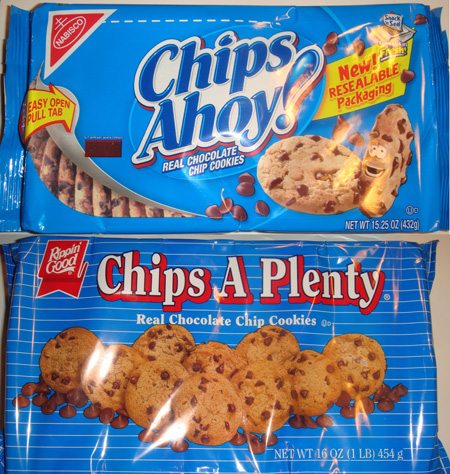 Normally I’m not a fan of packaged chocolate chip cookies (except Entenmann’s and even then, they’re not like they used to be) but Ethan and I saw these Chips A Plenty and had to evaluate. The two packages are similar and both have a red and white logo in the upper left corner. I had high expectations for any cookie made by a company called “Rippin’ Good”. I can’t help but think that it must be an awesome place to work at where everyone constantly high-fives each other and drinks beer at their desks. Anyway, on to the evaluation… 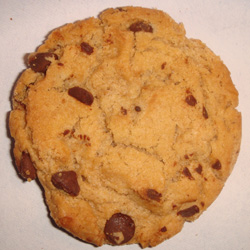 As these are known for, they’re pretty dry and crumbly. Despite that, they have a pleasant crunch and actually taste like a chocolate chip cookie. I think the best part of the cookie is the chocolate chips, they had a nice chocolate flavor and there was plenty of them throughout the cookie. 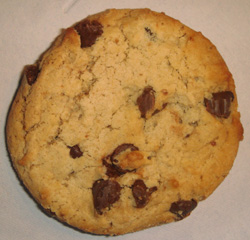 These are just as dry and crumbly but with much less flavor.
I was so confused, these weren’t Rippin’ Good at all! The dough had a pasty, chemical taste and the chocolate chips were like bland tasteless, waxy pellets. All these were A-Plenty of was blah.

Wrap up:
Ahoy! We have to say that the crew at Nabisco makes a better, dry crumbly cookie than the yahoos at Rippin’ Good. Even though they pretty much had the same texture the flavor of Chips Ahoy made it a much better product.

9 thoughts on “Chips Ahoy vs Chips A Plenty”