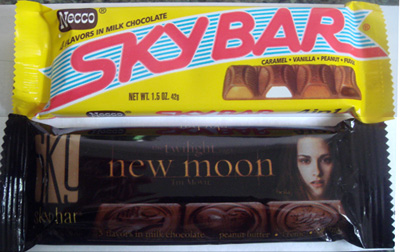 As I’ve posted before, I love Sky Bars.  I recently saw this new Twilight version and was baffled why they did this.  Sky Bar is made my NECCO (New England Confectionery Company) and I found that a lot of people outside (and actually a good amount inside) of New England are not familiar with these so how did an international phenomenon team up with such a regional candy?
Also just as confusing is why they cut down the awesomeness of SkyBar from four to three sections.  Yeah, there’s three main characters in the movie they’re promoting, but that’s not what SkyBar is all about!  Twilight should have picked another candy that could accommodate them and keep it’s format.
SkyBar:

My previous post about SkyBar’s images fell victim to geocities but you can read about it here.  There are 4 compartments: Fudge, peanut, vanilla and caramel.  Fudge is like…fudge, peanut is more like a peanut goo, vanilla is marshmallow and caramel is what it sounds like.  I’ll save some time and report that Sky Bar keeps it’s reliability – unless of course it’s old which is the risk you run when buying these because they’re not the most popular candy at the store but when they’re fresh, they’re awesome.

The skyBar-gone-Hollywood, only features the vanilla, caramel and peanut.  The peanut is a peanut butter filling instead of the goo which is okay, the vanilla seemed pretty much the same as well as the caramel.
In general, the big disappointment was the missing fudge, which is my favorite part of the SkyBar.

Wrap up:
I can’t get over the amputation of the fourth flavor, it’s just so wrong and I’m also sick of seeing these kids from the movie all over the place who are too cool to crack a smile.  The wolf guy seems like you might be able to have a half-normal conversation with him, but the other two just look like they have nothing going through their heads – all the time.  I know that doesn’t effect the taste of candy but it doesn’t help.  I’ll take a traditional SkyBar any day.

9 thoughts on “SkyBar vs SkyBar”