For this taste test I included three items:  HoHos, Yodels and Swiss Rolls.
HoHos are made by Hostess and I guess it’s been a while since I’ve eaten this stuff because I didn’t even notice when Hostess bought Drakes.  All Drake’s products now include “By Hostess” on the packaging.  Since I began buying food for this blog I’ve noticed a lot of things are now owned by someone else, even a past rival sometimes, and I’m convinced someday all snacks will be made by one company: Little Hershkellhostlayisco, Inc.  But anyway, on to the evaluation… 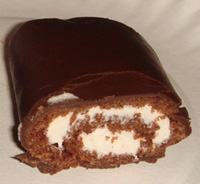 Although this was crushed, I did appreciate the softness of the cake.  Ethan and I both found the creme to be nice and smooth while the cake was just okay.  The texture was good but it lacked any real chocolate flavor, even though it smelled very chocolaty.

The Yodel stood up to whatever smooshed the HoHo (they were in the same grocery bag from the store) and when we tasted it, we knew why.
The cake was pretty dry, we needed to drink plenty of water with this. The creme was a little dense, but has a decent flavor. Any enjoyment of the flavor was overshadowed by the dryness of the cake though.  The outer chocolate coating seemed almost plasticy too. 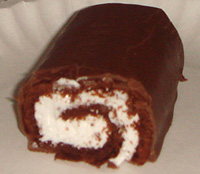 Swiss Roll was the most crumbly of the three.  The outer coating of chocolate peels off easily, almost as soon as I picked it up (if not already detached when taken from the package).  The cake was very moist and soft with an actual chocolaty taste.  Both Ethan and I noted that this was sweeter than the other two and the ratio of creme-to-cake was perfect.  I think Ethan described it as “more balanced” than the others.  The creme has a nice light texture

Wrap up:
I was disappointed in the Yodel, I remembered liking them a lot when I was a kid.  The cake was dry and there was not a good creme-to-cake ratio.
The middle of the road roll would be the HoHo.  It was much better than the Yodel but still seemed to lack the satisfaction one would expect consuming these calories.
Our top pick was the Swiss Roll. To me, Little Debbie usually knows what she’s doing. I’ve enjoyed her products through the years, and she does not disappoint with the Swiss Roll.  It’s crumbly but that’s because it’s so moist and delicate. The taste makes it the most worthy of the three.