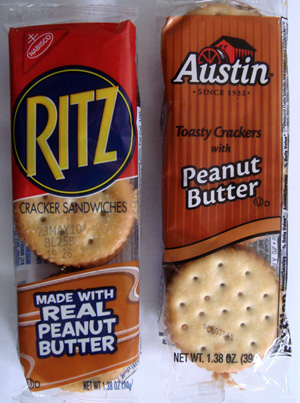 Peanut butter crackers are a pretty good idea, a little carb, a little protein, sugar, salt and -voila, snack. Not the best snack in the world. I’ve only had these out of desperation at the vending machine but they do seem to do the trick.
Come to think of it, I should keep, a packet of these in my glove box. That packet of ketchup that’s in there now probably won’t do much for me if I were stranded.
Anyway, let’s get on to the snacking… 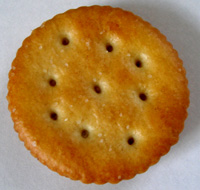 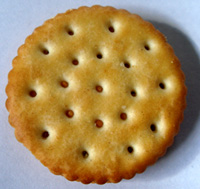 Very bland crackers with no salt. I really felt like I was eating a hardened water and flour combination with something in the middle that wasn’t necessarily peanut butter. We both ate another Ritz after these to end the evaluation on a better note. These are probably okay if there’s nothing else around and they’re not being compared to a more flavorful cracker, but they’re definitely not our first choice if we bought something like these again.

Wrap up:
Ritz, even though the peanut butter wasn’t very pronounced. They do what they do so well that they crackers make up for the lack of pb flavor.
Austin’s crackers were bland enough to not make them worth eating- although like I said, it might be because we were eating them right after the Cadillac of crackers.

While on vacation with my sister and brother-in-law, Rick, we got some chicken flavored biscuts. Rick is a fan and the only person I know who eats Chicken in a Biskit so I sat down with him and Ethan (my sister refused) to evaluate these poultry-themes crackers.

Chicken in a Biskit:

The first thing Ethan and I noticed was the extreme saltiness of these crackers. Rick described the texture as moist and flaky, which it was. My 3 1/2 year old nephew said they smell like chicken. I don’t know if I’d say these tasted like chicken if they were called something else but I guess it was something like dry chicken soup mix in a cracker, although Ethan did note that they do actually have dehydrated chicken in it as well.

I thought these crackers looked “friendlier” somehow but all every one at the table had to say about these were “gross” or “just gross”. That’s because they were. the only description I could drag out of anyone (other than gross) was “stale” and Ethan said it’s tastes like the grey pieces of chicken in cans of soup, and it really did capture that essence. My nephew wouldn;t even try it after sniffing it.

Wrap up:
Chicken in a Biskit wins for not being a totally repulsive cracker. I won’t be buying these again though because they’re way too salty and I don’t like things with MSG but if you have to pick one of these we’d suggest Chicken in a Biskit over the second rate version. 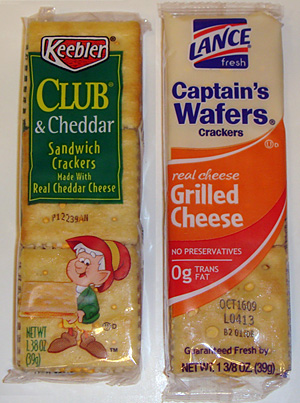 Although this cheese and cracker snack combo is offered by a few different brands, these two were on sale, so that’s what I got.
I’ve always considered this type of offering to be a second-rate snack in general.  For some reason it sticks out in my mind when I was in college and working at Crabtree and Evelyn in the mall and my manager was working a billion hours because the store just opened.  We always had candy or chips in the back room that we’d snack on but one day in the middle of her open-to-close shift she sat in the back room and pulled out one of these sandwich cracker packs and said “finally some real food!”.  I remember being confused and asking her why she didn’t just go to the food court (though not much better, a little closer to “real” food) but she declined and was content with the crackers because they had cheese in them.  I just remember wondering when she was going to get sick considering the amount of hours she worked and that she counted these as a substantial meal.  She looked pretty bad by the time I quit.
Anyway, my mom just happened to be in the neighborhood after I got home from the store and FINALLY got a cell phone so she called to see if I was around and just in time to help evaluate these! 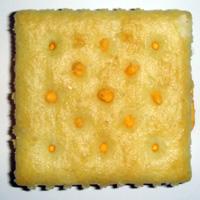 Mom and I both noticed how butter these crackers were, which we liked.  The salt was just enough too and I felt it really complimented the butteriness of the cracker.  Mom felt that the cheese had a chemical taste to it while Ethan and I had trouble tasting the cheese at all.  It was just there for texture as far as I experienced. 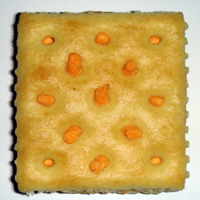 Mom felt the cheese was the same in this with it’s chemical taste.  I could taste the cheese a little more, not so much the sharpness of cheddar but it did add a creaminess that Keebler lacked.  Ethan said he still didn’t really taste any cheese.  The cracker was less buttery and salty but more dense, which mom liked.

Wrap up:
Mom liked the Lance crackers better because of their density and felt like a more substantial snack and Ethan and I went with the Keebler.  I liked the intense butter flavor of the crackers and Ethan didn’t specify in his notes (he conveniently came downstairs right after my mom left and tested these with his own).

Unfortunately, Sunshine baked goods don’t really exist anymore except as novelty items and I can’t compare Ritz with Hi-Ho’s but Ethan found these Goya crackers that seemed worthy of comparing. We have all these crackers now so I need to make some chicken soup (I just can’t do canned chicken soup but that may be a good comparison some day!)

Ritz has a nice crunch, that I’d describe as a “soft crunch”. A nice buttery flavor and just the right amount of salt on top to compliment the cracker.
Between the texture and the flavor this is a well-rounded (pun intended) cracker that goes beyond the serving suggestion and goes well with pb&j and, as I mentioned before, is very nice in chicken soup.

These had a different crunch, sort of dryer. There is a lack of buttery flavor, and they taste more like Saltines. Salt is present but a little too sparse on the surface, yet still a somewhat satisfying cracker. Not Ritz but not bad.

Wrap up:
We went with Ritz for it’s buttery flavor and full-bodied crunch. I would like to point out though that Goya does make a very suitable cracker that even Ethan (who is a Ritz fan) said he probably wouldn’t mind if he had to substitute these for Ritz. So if Goya is all that’s available, I don’t think you’ll be too disappointed. 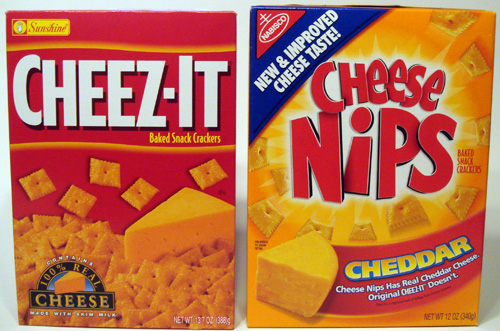 Cheez-Its are one of my all-time favorite snacks. For some reason they go really well with Tab.  I thought it was just me but I had some people try the Tab with Cheez-its once and they agreed.  I don’t know what it is but I don’t care.  Cheez-Its of course do mighty fine on their own too and that’s why I love them so much.  I’ve tried other brands but they’re just not the same.  For this evaluation, I got the arch enemy of Cheez-Its: Cheese Nips.  In this evaluation we had the help of pur friends Marc and Sara. 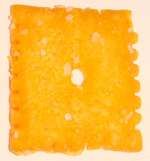 One comment was that these have a toasty cheese flavor.  We all felt the saltiness was just right and they have a good crunch to them.  I usually like to let these sit in my mouth for a little bit and suck off the salt and then let the “it” soften up and then that’s when I take a swig of Tab (so good!).  We all agreed these had a very satisfying cheese flavor and a nice crunchy (one person thought somewhat buttery as well) texture. 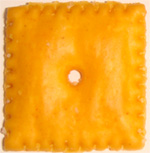 Cheese Nips were visually different in that they seemed to have less texture, like a saltine.  There isn’t the salt presence that Cheez-it has, although some did have a few smaller granules of salt on them.  We agreed these lacked the same full-bodied cheese flavor and almost resembled an oyster cracker with a little bit of cheese flavor.  Also, these were a little dryer than Cheez-Its and didn’t soften in my mouth the way Cheez-its do.

Wrap up:
Cheez-It all the way from all 4 of us.  Although Cheese Nips claim they have real Cheddar cheese in them and Cheez-It’s don’t, I guess whatever Cheez-It is doing is right (to us anyway) because we enjoyed these much more.   I know this is kind of touchy because people seem to get upset over these dueling cheese crackers.  I mentioned I was going to compare these to the intern at work (way back earlier this month when I had a job) and she felt very strongly about Cheese Nips and how disgusting Cheez-Its were, almost like she thought people who favored Cheez-Its also ate dog food.   It was very strange. I’ve seen other people feel the same way about Cheese Nips, so in case anything like that starts here kids, remember to keep it civil  ? 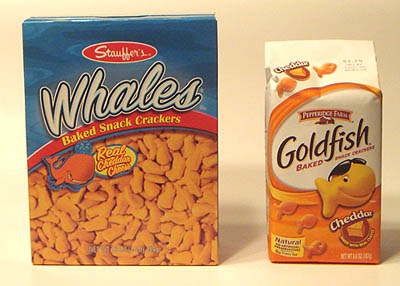 To make a long story short, Ethan and I found ourselves shamefully at Wal*Mart tonight.
I won’t get into how I disagree with their business practices but we just went and figured while looking for what we needed, it may be a great source for second rate snacks.

We got some good ones, but the most impressive product we found was Stauffer’s Whales.  Of course we were compelled to try them so they made it into the basket and after waiting 20 minutes in the check-out line, we brought them home to test.

These crackers were a little larger than Goldfish, (much like how real whales are bigger than real goldfish!) the first thing I noticed when I put one in my mouth was the nice salt-to-cracker ratio.  I like to just move the cracker around in my mouth and take in any cheddar flavor before chewing, and did get some flavor.  Ethan felt that although they didn’t really taste like cheddar, they were good.
I felt the flavor in general was pretty good but something about the texture seemed dense or stale or missing a certain crunch but Ethan thought the texture was fine, so maybe it was just  me. 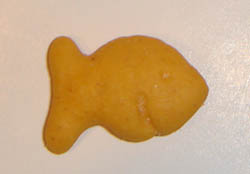 Next was our childhood classic, Goldfish.  These actually seemed pale in flavor after the Whales.  We agreed they were lacking any real cheddar flavor and actually tasted more like a saltine.  Even the salt didn’t seem as good on these.  It’s saving grace was the texture which was a little more crunchy and didn’t seem as mushy after chewing.

Wrap up:
It was a big surprise that we found ourselves enjoying the Whales more than the Goldfish, BUT you *might* say they cheated, since they do include MSG in their ingredient list and Goldfish doesn’t.

Since we haven’t seen these before tonight I’m not sure many other people have but I’ll ask anyway.