To be honest, I never even knew what a 5th Avenue bar was (besides something I traded after Trick or Treating) until a couple of weeks ago when we were thinking of some second rate items and Ethan recalled that it might be similar to a Butterfinger.  On the wrapper it states “crunchy peanut butter” in milk chocolate, which seemed similar enough to Butterfinger so we gave them a try. 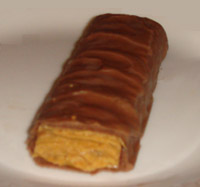 I found 5th Ave. to have a great PB to chocolate ratio and very peanut buttery flavor.  The salt and sweet contrast was perfect and the middle was nice and flaky.  Ethan however felt there was too much chocolate and the peanut butter did not have a lot of flavor. 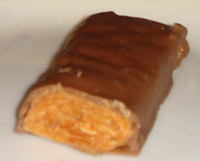 I thought Butterfinger had much less peanut butter taste and was more like hard toffee, which stuck in my teeth.  I thought there was not enough chocolate to balance it out either.  Ethan thought this had more PB flavor than 5th Ave. and a more enjoyable amount of chocolate and in general thought this was a much better bar.

Wrap up.  Confusion. We felt completely opposite about these bars.  I’m not a fan of the whole crunchy-flaky peanut butter thing anyway, but if given a choice I would absolutely pick the 5th Ave over the Butterfinger and Ethan felt the same way about Butterfinger over 5th Ave.  We totally could not understand each other’s feeling about these bars but I guess these have enough “personality” that it might be fair to say there was no clear second rate version, just personal preference.

13 thoughts on “5th Avenue vs Butterfinger”