I think everyone has had a fruit roll-up in the lunch bag at school.  They’re convenient, tasty and something that needs to be ripped apart so they’re perfect for kids.  My only issue with these are how terribly they stick to my teeth, making them so enjoyable I stopped eating these many years ago. 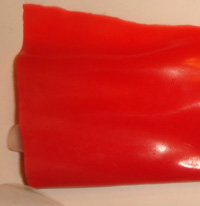 These were very smooth in texture and had a slightly plastic feel.  The strawberry smell was very strong.  The taste was a little too sweet and had an artificial quality to it, but still fruity.  Ethan said he was afraid to bite down, I was too so I just kind of rubbed it against the roof of my mouth with my tongue until it dissolved. 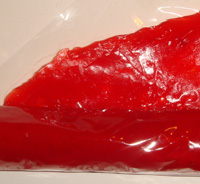 I feel like we should have tried the Fruit Roll first because it just didn’t taste too good.  We spit out our pieces before we were done eating them.  Later I found out that dried apricots are the main ingredient which explains the rough texture and less strawberry taste that Fruit Roll-up had.  Although I do remember the original texture of Fruit Roll-ups being more like this years ago.  There is still corn syrup and sugar in these but I think it’s the apricot base that really disrupted the strawberry flavor.

Wrap up:
We just barely sided with Fruit Roll-up (instead of neither) just because we didn’t spit it out when we were eating it but we weren’t crazy about the artificial and overly sweet taste.  I did like the more natural texture of the Fruit Roll though.  If anyone is interested, it turns out Fruit Roll was on the market before Fruit Roll-ups and you can read an article here about how the company stopped giving interviews after an article in the ’70’s provided a competitor with enough ammo to make their own. (From the article) “That company was bought by Knox gelatin, which was purchased by Lipton. That product became the Sunkist fruit roll, the first major snack food of that kind, followed by General Mills’ Fruit Roll-Ups, to hit the market.”