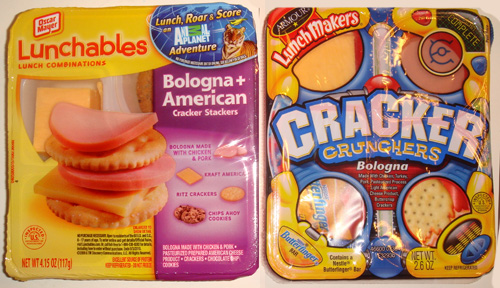 I’ve never had a Lunchable before.  The concept is okay but still, to buy something like this on a regular basis seems kind of needless when it’s so easy to put something like this together on your own.   But I guess they have a market because they seem to be very sucessful.
I found both Lunchable and LunchMaker varieties featuring bologna and American cheese.  I almost picked the turkey but remembered Ethan doesn’t like turkey and the way the meat sliced looked had everything I hate about cold cuts- the multi-colored pieces with a clear ribbon of gel that keeps the mismatching pieces of meat together.  Not that bologna is any less gross in that respect, but I do appreciate the uni-colored mass that has been pureed to the point that it’s just one texture. 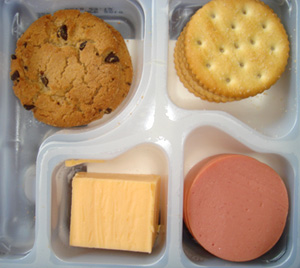 Lunchables have the big name of Oscar Mayer so they boast name-brand items like Ritz crackers and Chips Ahoy cookies.  We noticed that the slices of bologna were extremely thick (as far as cold cuts go) and that added to it’s rubbery texture.  Plus it had a weird taste to it, at first I thought it was peppery but then I really couldn’t figure it out.  The Ritz crackers were surprisingly non-Ritz like.  Ethan described them as having McDonald’s cookie taste/consistency.  These must be made especially for Lunchables and they cleary use a different recipe.
The cheese was the most processed tasting cheese I’ve ever experienced.  With very little flavor, it seems to be added just for filler.  The cookies tasted like the standard boxed cookies- not disappointing in that way. 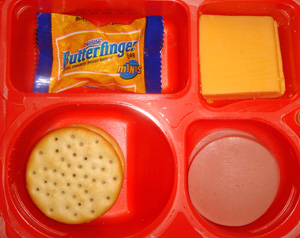 We liked that the bologna slices were much thinner and tasted better.  There was no weird flavor and I guess you might saw we appreciated that in comparison to Lunchables.  I thought the cheese tasted better, it actually tasted like cheese.  The crackers were okay, they did their job as being a vehicle for the bologna and cheese.  Ethan ate the Butterfinger which he reported tasted like a normal Butterfinger.

Wrap up:  We weren’t really crazy about either, but sided with Armour’s LunchMakers because of the thinness of the slices and the all-around slightly better taste.  Ethan even said it tasted more “natural” in comparison to Lunchables.   We expected more from Lunchables because this meal/snack format was their idea and they had the “Ritz” crackers.  The disappointment of the second-rate version of Ritz’s own product was a big demerit.  Plus being a leader in the cold cut industry I expected better taste and normal slice thickness from Oscar Mayer.

11 thoughts on “Lunchables vs Lunchmakers”