One of the great ice cream shop(pe) treats is a root beer float. I’ll make these one in a while at home too. I’ve seen this product of root beer float in a bottle and had my doubts but finally gave in and bought one, just for the sake of trying it. A&W makes a pretty decent root beer so I figured they must know what they’re doing when trying to recreate a root beer float in this format. There is also an Orange creme version of this but for some reason that combo never tasted good to me so I just got the root beer or just “Float” version. 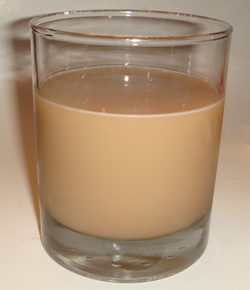 This post is almost too easy because I could wrap it up in one word: “no”.
I don’t know why anyone at A&W would think this passes for a root beer float. Never mind the lack of froth or carbonation but the taste was very chemically. I guess there was some vanilla and root beer flavor but for the most part, it tasted like something NASA made for their crew to “remind them of home” but if you’re on planet earth, just make a root beer float normally because there is no amount of convenience that is worth drinking this.

21 thoughts on “Glad there’s only one of: A&W Root Beer Float”