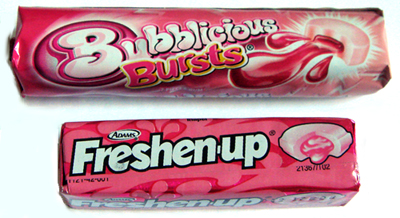 I know, gum isn’t really a “snack” but it is something I consider a snack substitute and according to childhood folklore, it can end up being an 8 year snack if you swallow it.  Gum plays such a big part of my life I just felt I had to include it.  Although, I haven’t had this particular gum in many years, I felt it was worthy of a taste test.
In a perfect world, Chewels and Tidal Wave would still be around and I could include them in this comparison but these are the only two liquid-center gums currently available.

This gum is very sweet, the bubble gum flavor is apparent but is kind of masked by the overwhelming sweeteness.  The liquid center has a little thickness so it doesn’t just spill out (although normally it shouldn’t matter because it’s in a mouth anyway).  The texture is nice and soft and is elastic enough to blow some  bubbles, not the best, but okay.

I had high hopes for this classic but even though the initial flavor was decent, it only lasts for what seems like only a few seconds.  The liquid center is much more gooey and kind of gross.  The chew on this is pretty bad, there’s is no elasticity so in under a minute I found myself chewing on a hard, tasteless wad of something that resembled gum.

Wrap up:
Bubblicious wins this round but I think more because Freshen Up is so bad.  I did happen to randomly find a third party sold only as individual pieces but I it looks like it’s a Bubblicious product:

But I guess why would they make two liquid-center gums?  I did a little looking online but didn’t really find anything on Bubbaloo so I can’t tell if this is a copy-cat or sister product.  I tried it and it looks and tasted like the Bubblicious except that it had better bubble blowing abilities.

6 thoughts on “Bubblicious Bursts vs Freshen Up”