One of my favorite eats is macaroni and cheese.  I love making Alton Brown’s recipe and sometimes I’m in the mood for some old school boxed kit with bright orange powder.   It’s just one of those things that really hits the spot, so  when I saw these single-serving microwave versions, I just had to try. 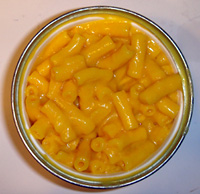 This had a cheesy aroma and although the noodles were almost mushy and over cooked, I liked this texture.  It doesn’t look it, but the cheese sauce was kind of watery and bland.  It smelled better than it tasted.  There seemed to be an undertone of beefaroni- somehow, not even in a beefy way but it just did, Ethan and I both felt that way. 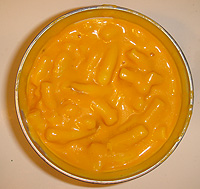 The sauce was more orange, thicker and smelled pretty gross. I wish I could describe this better but we both thought this tasted very “Hormel” which I can only describe as “industrial”. The noodles are more “al dente”. It also somehow had faint trace of meat flavor, which was gross.  Maybe they made this in the same machine as one of their meat products or something, who knows.

Wrap up:
I actually went into this hoping I might be impressed with the concept of microwavable macaroni and cheese but it turns out that this is a terrible idea.  The lesser of two evils here would be Chef Boyardee but it’s hard to actually recommend it.