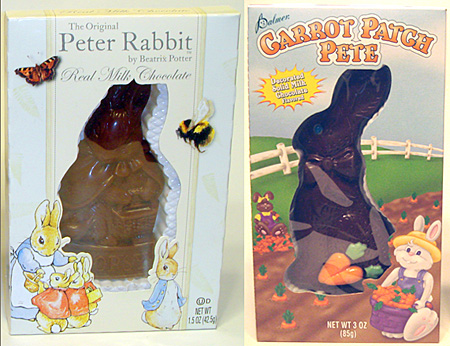 I was walking through one of my favorite sources for second rate snacks, Dollar Tree, and lots of Easter candy and two versions of chocolate rabbits.  First “The Original Peter Rabbit” and then Palmer’s “Carrot Patch Pete”.  What? you never heard the tale of Carrot Patch Pete?   I think what intrigued me most is the statement on the package that reads “Decorated Solid Milk Chocolate Flavored”  I never get that, if they can flavor it like chocolate, why not just use chocolate?  and if it’s not chocolate- what is it? 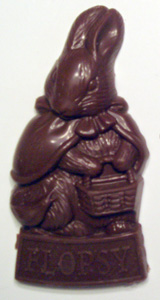 Ok, so I wasn’t paying enough attention and realised when I got home that I had picked up a “Flopsy” instead of a Peter rabbit but we will trust that the only difference is the mold the chocolate is set in and Flopsy tastes the same as Peter.
The package reads “Real Milk Chocolate”, written all fancy-like in cursive so we had high hopes for Flopsy.  I don’t know how, but this seemed taste like what I imagined Carrot Patch Pete would taste like, and it’s not just because milk chocolate isn’t my favorite.  Ethan, who preffers milk over dark chocolate, said this didn’t taste choclately and was “pretty gross”.  It sounds weird but it was really hard to describe this, all I can think of is tasteless and disappointing. 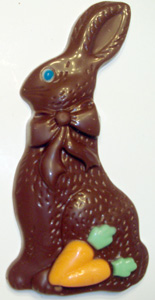 The first thing we noticed was that Palmer colored in some if the details on Pete.  I felt bad breaking him in half because the expression on his face is like he’s thinking “Hey, what are you doing?” but we had to do what we had to do.   Pete was very sweet, almost too sweet .  I agreed with Ethan that while this did have chocolate flavor, it was very artificial tasting.  I looked at the ingredients and saw the first two were sugar and partially hydrogenated palm/palm kernel oil- and that’s what it tastes like.
Needless to say we chose not to torture ourselves too much and stopped after one bite.

Wrap up:
Both losers.  I’m still puzzled why the real milk chocolate tasted so bad but we found it to be just as gross as the mockolate.  I feel bad for any kids getting either one of these in their baskets to day.  Anyway, Happy Easter!