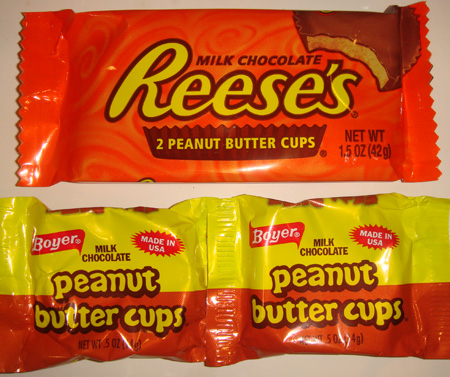 I had only seen the Palmer version of peanut butter cups so when I found these Boyer (who I’ve only experienced their Mallow Cups) I thought this would, at the very least, be an excuse to eat a Reese’s even if Boyer was a let down.

The usual awesomeness. Perfectly balanced chocolate with smooth creamy (and not too sweet) peanut butter. There is just something that is so reliably good about these.

As soon we bit into these we could tell they’re weren’t up to speed.
Ethan was disgusted by the chocolate. I didn’t mind the chocolate as much as the peanut butter which seemed to be mostly “filler” of some sort, I have no idea but it was a very weak PB flavor and felt like I was eating crisco or something.

Wrap up:
Sometimes smaller brands are better but not in this case. We both couldn’t get over our issues with the Boyer cups. I wish I could support the little guy in this one but there’s really nothing like a Reese’s.