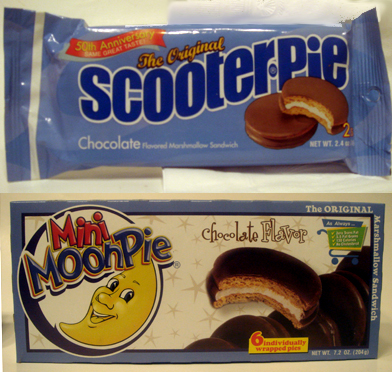 I’ve heard of Moon Pies and not sure if I’ve heard of Scooter Pies but somehow managed not to have any experience with either until today.  I thought it was kind of interesting that both claim to be “the Original”.
These seem to have such tasty potential: Chocolate, cookie and marshmallow.  What could go wrong? 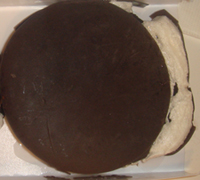 So…I guess something happened on the way home from the store because when I opened the package, the marshmallow was squished out of the “sandwich”.  It turns out it that didn’t really matter.  The marshmallow didn’t have he capability to go far as it’s was like a thick, bouncy glue.
Ethan and I were surprised that it didn’t taste very good.  The marshmallow was blah, the chocolate was pretty much undetectable and I thought the cookie had kind of a chemical taste, Ethan thought he tasted a hint of banana.
The cookie texture was odd to us too: not crisp but not soft.  Like stale but according to the expiration date, it wasn’t due for the trash until the end of next month. 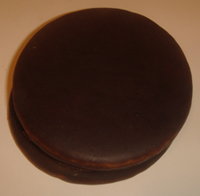 Moon Pie looked better but I guess just because it had a less traumatic ride home from the store.  I haven’t done any research, so I don’t know if these are secretly owned by the same master company  but we found this to taste identically – which we both described as “gross”

Wrap up:
I feel a little bad not liking either of these because I know one of these must be very popular but neither were edible beyond 2 bites.  Fake chocolate, gluey marshmallow and stale-like cookies were all we tasted.
I can imagine a home-made version of these would be fantastic though.