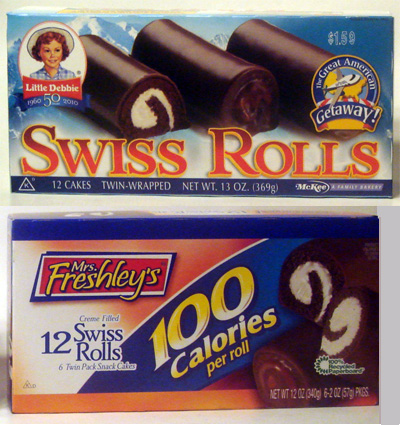 We’ve done Swiss Rolls a few times and Ethan and have preferredthe Little Debbie version but we’re always up for finding and excuse to eat these so when we found Mrs. Freshley’s verison, we were happy to evaluate. 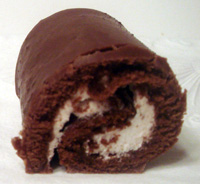 We didn’t expect much from these but they smelled good.  Upon biting in to this we both found the cake to be very moist and soft.  The vanilla creme is really the star of the show, it was so creamy and delicious.  Ethan said the only thing not really amazing was the chocolate, it didn’t taste all that chocolatey but the creme was so good, it made up for the lack of chocolate flavor. 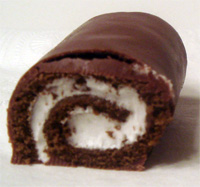 Little Deb was held it’s shape a little better but the cake was just a teeny bit dryer (to me, not to Ethan).  We did notice there was even more of an absence of chocolate flavor.  Ehtan said it tasted more like a Twinkie than a Swiss Roll. Then I noticed that it actually smelled exactly like a Twinkie
too!