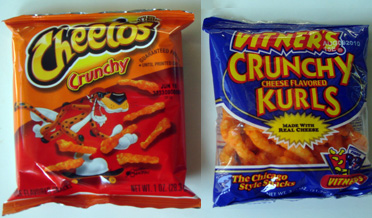 I never heard of Vinter’s before.  They’re from Chicago and I lived there for a year but never noticed them, although that was in my pre-snack evaluating days.  I checked out their website, and they have quite an extensive product list.  I don’t know how but they managed to make it to the Dollar Tree in Ashland, MA.
This bag came in a variety pack, withcorn chips and cheese puffs but since “Kurls” is spelled with a K I decided to evaluate them.

Cheetos have a nice tanginess to the cheese flavoring.  They also have a very satisfying crunch.  It seems a little weird but I liked tasting the oil in each bite and although the oil had a presence, it didn’t make the crunch heacy and they’re not oily to the touch.

These had a little less cheese flavor to them.  Well, they had decent flavor but didn’t have that tanginess, which gives Cheetos a little something extra.  The crunch was also lacking – but, I will give them a break since these were at the dollar store and not bought anywhere near the Chicagoland area.

Wrap up:
I like to support the little guy and they may not have been given a fair shake this round, but Ethan and I both preferred the Cheetos version because of the strong flavor and delightful crunch and texture.