As I’ve mentioned before I love making macaroni and cheese from scratch but I also like testing out pre-made versions as well.  Some are terrible and some great like the very hard to find Howard Johnson’s brand mac & cheese.  I’m actually not sure if it’s even still made, it’s been at least two years since I found it anywhere.  I remember the last time I had Stouffer’s mac & cheese.  It was 2001 and had been dating Ethan for a few months.  I came over his place after working late and eating a Stouffer’s mac & cheese and around 11pm started a vomit fest in his bathroom.  I couldn’t even go to work the next day, I was too exhausted from puking all night.  Someone said it sounded like it had been thawed out and then put in the freezer again so I’m guessing that’s what happened.  Somehow I put that memory aside and Ethan and I evaluated Stouffer’s against Michelina’s. 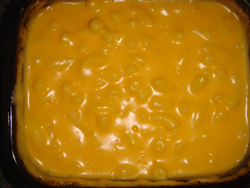 Looks a little too familliar to my last experience but it tasted okay. Ethan liked that it had a lot of sauce and has a good cheese flavor. I felt like it was lacking a little sharpness to the cheese flavor but I did like the well-cooked pasta. 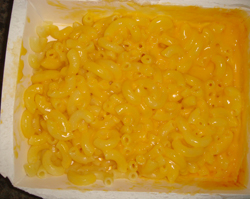 Ethan didn’t like the lack of sauce.  We both liked the flavor of the cheese but Ethan felt there just wasn’t enough  of it.  I like of liked that it wasn’t swimming in sauce and to me the flavor got to all the macaroni fine and tasted a little more realsitic than Stouffer’s.

Wrap up:
Split.  Ethan preffered the abundance of sauce of Stouffer’s and I liked the flavor of Michelina’s.  Both had pleasantly cooked pasta and neither of us threw up after ?