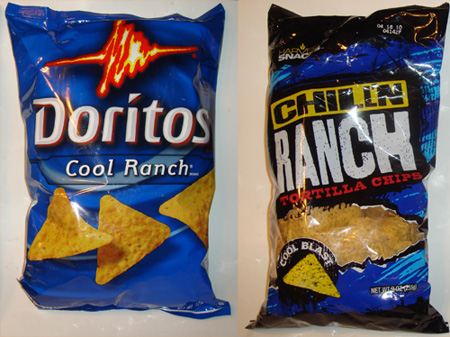 I both remember and forget when Cool Ranch Doritos came out.  Sometime when I was in Middle School, I  think (I forget), and I remember thinking Nacho Cheese is so perfectly awesome, why create another flavor?  But I have to say they won me over even though I’m not a big corn chip person.  I can’t stand Fritos or things like that but there was something about Nacho Cheese and then Cool Ranch that made corn chips so enjoyable.
Although honestly, the last time I had a Dorito of any kind was in September of ’08 so I’m still not a die-hard fan but I guess I’m due for some corn chip evaluation. 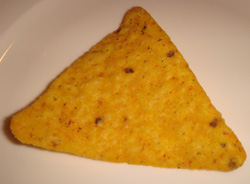 They don’t look to exciting but the taste was totally what I remembered it being like from past experiences.
Flavorful with a slight tang that made it so “ranchy”.  It’s interesting that there really isn’t a creaminess quality but they still somehow capture the essence of “ranch” so well.  Ethan they make his “taste buds tingle.”   The only thing Ethan said was kind of a minus was that the corn chip itself didn’t taste as good as Nacho Cheese Doritos.  He couldn’t tell if it was the chip or that the ranch flavor overpowered the flavor of the chip. 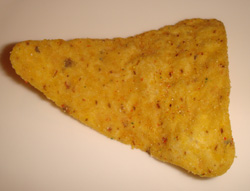 These looked pretty much the same, even had the specks of red in the flavor powder that Doritos had but the taste was off.  We couldn’t put our finger on it but there was something missing and added that made it taste weird.  The only thing that came to mind was “chemically tasting”.  One thing I felt might have also made a difference was the chip tasted like it was too toasty even though it didn’t look burnt, it had that overpowering toastiness.

Wrap up:
It seemed that the Cool Ranch flavor over powered the chip while the Chillin’ Ranch toastiness of the chip kind monstrously harmonised with the chemical taste of the ranch flavoring.
We both agreed Doritos was a better chip because of the flavor being so good and because of that it wasn’t a big loss not to be able to taste the chip.  Ethan and I both had to eat a couple of Doritios to get the Chillin’ Ranch taste out of our mouths.