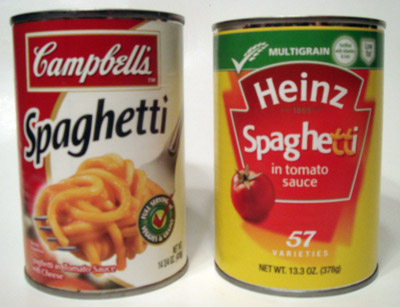 I thought I’d have a triple header here but Chef Boy-ar-dee only makes spaghetti with meatballs.  We found this British Heinz spaghetti in a store in Vermont (where you can still buy “Gee Your hair Smells Terrific“) but I’m guessing it should be in most import sections of your local grocery store- maybe not, I don’t know.  As I mentioned in my previous post, Franco-American was bought out by the almighty Campbell’s mega-corp, although the only product that they still allow to carry the Franco-American label is their slow roast gravy.  You’d think they’d keep F-A associated with their pasta products like Spaghettio’s but…no. 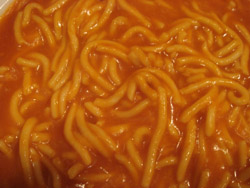 So what you’re looking at here is the most mushy pasta you will ever eat. Perfect for accommodating those who just got their wisdom teeth out, it’s like a micro-molecule away from having the consistency of pudding.
The pasta (besides from being mushy) had a very starchy taste.  The sauce was not very tomatoey and Ethan noticed there was a slight tin taste from the can.  Also the sauce was sweet.
Not much to care for with this product. 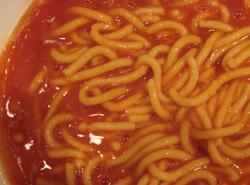 The pasta was slightly more firm than Campbell’s.  The sauce was disappointing.  I though the deeper red color would mean it was going to taste more like tomatoes but that wasn’t the case.  As hard as it was to believe, this actually had less flavor.  It might have had something to do with that there was no cheese in the Heinz version, like Campbell’s had, and as we all know cheese make everything taste better ?

Wrap up:
It’s funny when you think something is terrible and then you taste something that is even worse.  We actually preferred Campbell’s over Heinz.  There was just something so lacking in Heinz that made it hard to eat and not dip the fork back into the Campbell’s bowl. Mushy, startchy, tinny tasting spaghetti with cheese is better than slightly firmer spaghetti with bland sauce.

7 thoughts on “Campbell’s vs Heinz”