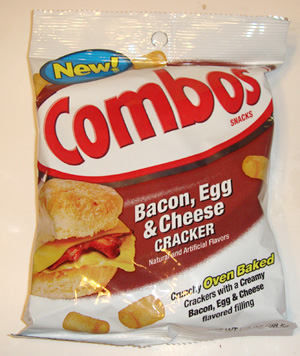 I almost don’t know where to start.  I guess I’ll start with saying there are some flavors of Combos that are good, like Nacho Cheese and Cheeseburger, but when I saw these I thought “Sick, I have to try though!”  So knowing that Ethan hates egg, I skipped him and brought these to work.  Only two people, Becca and Brendan, were even brave enough to consider when I emailed them to come over to my desk to try these.  I think I lost Becca immediately when she looked at the package and said “Ew…New?”  Then I opened it and they would only smell the Combos.  Brendan said they smelled like dog treats, Becca agreed and then they walked away, sans Combos.
So I conducted this evaluation solo. 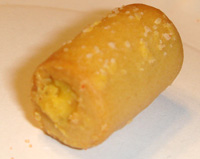 Okay, so they didn’t smell great. I wasn’t expecting them to smell good either, but for all the horror they induced with Becca and Brendan, these were pretty uneventful.
After the plain crunchy cracker, the center tasted mildly like egg and a little bit of cheese.   I was surprised that they really lacked bacon flavor considering how easy it would be to add smoke (or at least imitation smoke) flavor to jazz it up.  They weren’t the worst thing in the world, but I definitely would not buy these again.  Some flavors, like egg, should not be artificially replicated.
I don’t see these featured on the Combos website, so I guess they’re discontinued already – probably a good thing.

13 thoughts on “Glad there’s only one of: Bacon Egg & Cheese Combos”