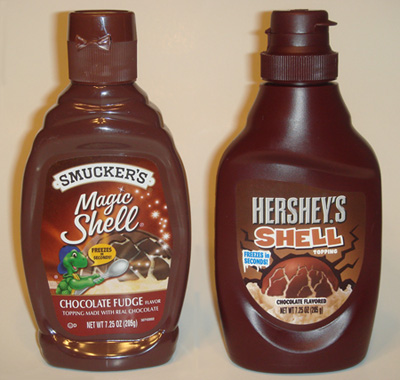 Magic Shell was introduced in the 80’s at some point.  My sister and I were so excited to try it.  I tried to find a commercial for it on YouTube but there aren’t any.  I just remember we were impressed and got permission to bring it into the house.  Most supermarkets don’t carry an equivalent but I found Hershey’s Shell at Target.
Both claim “Freezes in seconds!” on their label and both are chocolate or chocolate fudge “flavored” syrup. 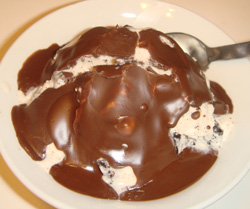 I let this sit for probably about a minute  while I was taking pictures of the Hershey’s and when Ethan and I tasted it, it still had some non-hardened areas.  When I cracked the top with my spoon, it yielded softly and while it was definitely harder than plain syrup, it was not the hardened cracked coating I thought it was supposed to create.
The favor is okay, Ethan found it hard to describe as anything other than “alright”.  There was nothing wrong with it, just your average milk chocolate flavor. 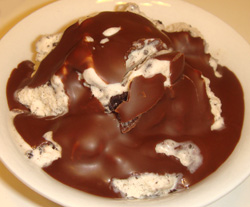 I poured this on after the Magic Shell and it solidified faster as well as forming an actual hard coating that broke into pieces instead of just “mushing”.  In fact I had to chip away at it where the syrup met the bowl, that’s how serious this was.  Hershey’s is less sweet and has more of a dark chocolate flavor.  A more intense product all around.

Wrap up:
I was surprised that Magic Shell wasn’t as awesome as I remembered, especially since it’s the original hard shell syrup.   I have to say I really preferred the Hershey’s because of the crunchy coating and I like dark chocolate AND it wasn’t a waxy “mockolate” tasting flavor that I have been finding in a lot of chocolate products lately.  It was a rich, satisfying semi-sweet flavor.
Ethan preferred the Magic Shell because he’s not a fan of dark chocolate and didn’t mind the softer coating.