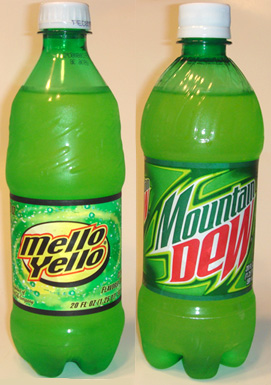 A big thank you to my cousins in Georgia who kindly played along and shipped up a bottle of Mello Yello for us to evaluate.
It’s been a long time since Mello Yello was available in the Northeast and while their logo has changed through the years, I think they had it perfect with the first one.  I’d say the same goes for Mountain Dew.  I don’t know about Mello Yello, but from my observations, Mt. Dew is mostly popular with males who are under 30 years old.   I’m not sure what it is: the intense sweetness, the elevated caffeine, the vibrant yellow #5?
I also thought it was kind of interesting that Mountain Dew’s angle for a while was “Do the Dew!” which included skateboarding, mountain climbing and riding sharks.  In comparison, Mello Yello does indeed seem more mellow as the commercials I found are uncomfortable situations between males and females asking “How would you stay smooth?”.
Ethan and I tasted this and then I brought the rest of the Mello Yello bottle into work to be tasted by our resident everyday Mt. Dew drinker, (who is a 24 year old male) Brendan.

We were out of our usual plastic tasting cups so we used wine glasses.  It’s kind of funny how this almost looks like chardonnay (or pee).
The color was a little brighter yellow than how the picture came out.  Ethan and I felt this was extremely sweet and syrupy.  Brendan’s notes on this were the same, he felt it was okay but also said it was more syrupy than Mountain Dew and that dominated the flavor.  I thought it tasted a lot like sprite and wondered if that is the base for this soda.

This was very similar to Mello Yello, almost undetectably different but it does has a very lemony flavor that I felt tasted like those free lollipops you get at the bank.
Ethan said this was very citrusy but didn’t really see why he used to like it so much in college.  I guess its worth noting that both drinks have orange juice in them too which probably helps add to the strong similarities between them.

Wrap up:
We really didn’t notice much difference between the two and I can see why in some areas of the country only one of them is offered.  I will say that Brendan, being a hard core “Dewer” prefered Dew and felt Mello Yello was sweeter but he didn’t say he would never drink it again, if offered.  In fact, he finished the rest of the bottle.  I’d be interested to know which is more popular in areas where both of these are sold, which as the Coca-Cola distribution rep told me, is only in the south.