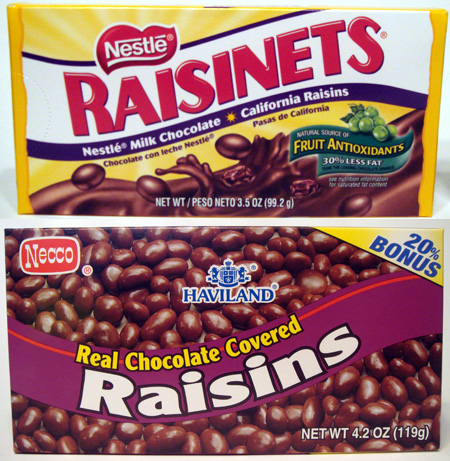 Rasinets are a once-in-a-while thing that although I like, I just find myself not buying that much.  I think I used to mostly get these when I went to the movies.  I probably only go to the movies once a year and can’t even remember the last time I went (Rocky Balboa, I think) so it’s a been a while but after seeing the Haviland/Necco version figured it was time to revisit Rasinets. 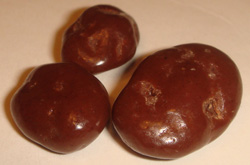 These have more texture on them than the graphic depicts on the box but I like the little divits that are formed from the chocolate encompassing the raisins.  When biting into these, I noticed they’re a little gummy.  Slight raisin flavor but it could be chocolate covered spitballs and I might not notice right away.  The chocolate isn’t the worst but does have that “mockolate” lack of flavor and just corn syrupy sweetness.  Ethan and I also detected some sort of chemical-like after taste.  It’s weird I remember liking these but maybe they changed their formula . 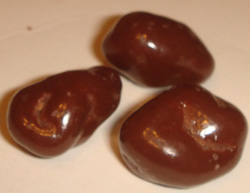 We first noticed that these have a smoother, shinier coat of chocolate. These are also more firm when biting into, it made them seem more substantial.  The chocolate we noticed actually tasted like chocolate and there was detectable raisin flavor.  No chemical after taste either. Perhaps because as they claim, they cover their raisins with REAL chocolate. (Although I can’t tell from Raisinet’s inredients why it wouldn’t be real chocolate too)

Wrap up:
Haviland wins for taste.  I say that because taste is obviously important but it could be because they have partially hydrodentated  palm kernel oil and Rasinets doesn’t.  I think it’s safe to say neither of these are really healthy regardless of the “fruit” inside but if you care about PH oils you may want to stick with the Raisinets but suffer with the mockolate covered spitball taste.