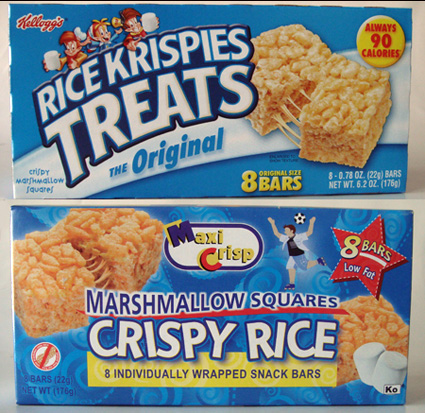 Of course most of us are familiar with Rice Krispie Treats, just like mom used to make (not my mom of course, that would be too normal) packaged as individually wrapped (90 calorie) bars.
It seems kind of convenient that the competitor product, awkwardly named Marshmallow Squares Crispy Rice, is made a company called “Maxi Crisp”. I wonder if they are a company that specializes in crispy products or they chose that name because they knew this was the only product they would make.
I like that instead of Snap, Crackle and Pop they have some kid about to get wailed in the head by a soccer ball. Maxi Crisp’s package is similar with the same size box and blue and white color theme, but how similar in taste are they?

I was surprised how soft these were and yet still held the crispy rice form providing a nice combination of softness and crunch in each bite. These are very sweet and have a strong vanilla flavor. Overall these were delicious and just as good as making them at home. 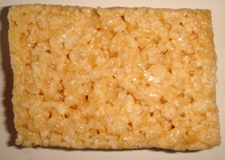 I noticed the rice in these were packed a little tighter, providing a denser bar. They were noticeably less sweet than the Kellogg version but still delivered the same general taste but milder. Ethan felt there wasn’t enough marshmallow involved but I didn’t mind.

Wrap up:
Kellogg’s wins but just by a little bit. There was something about the intense flavor and gentle texture of the Rice Krispie Treats that earned being called a “treat” instead of a mere “square”. I will say though that Maxi Crisp makes a decent bar and will not disappoint if that’s all that’s available.