I’ve never tried either of these but I thought SnackWell’s was the first of this kind of cookie and the clear second-rater was the challenger which I can’t even tell what the brand name is “Oven Baked” or “Great Taste” but they do boast on their box that they’re “The Original”. Both are Devil food cake coated with marshmallow and chocolate. 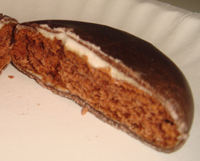 These were amazingly identical, the only difference was that they seemed a teeeeny bit dryer in the cake park but other than that they had the same chewiness and chemical taste.

Wrap up:
SnackWell’s by an inch, just because Great Taste or whatever it’s called is a little dryer. Honestly though I think if you don’t mind the chemical taste anyway of SnackWell’s you will enjoy the same flavor with Great Taste and probably not even notice the minuscule difference in cake dryness if you’re not comparing one right after the other.

10 thoughts on “Snackwells vs Great Taste”