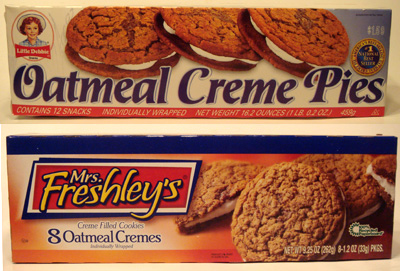 This isn’t the first time Lil’ D and Mrs. F have had a showdown on this blog but it’s hard to count one or the other out since I’ve only evaluated these against each other twice and bot have been a winner and a loser.
I think back about how disgusting it was to have the Little Deb version of these in the kitchen closet at all times when I was growing up. They were “Hebrew school friendly” and a common snack to bring to three hours of passing notes and flinging whatever we had in our Trapper Keepers around the room. 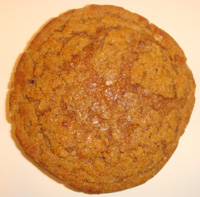 Opening these individually wrapped cookies releases a Twinkie-like aroma, which is artificial but sweet and characteristic of a mass-produced “bakery” treat.
The cookie is nice and moist and slightly reminiscent of an actual oatmeal cookie. Ethan and I each had a cookie/pie and he asked “what are these supposed to filled with? Marshmallow?” I always thought it was supposed to be something resembling whipped creme but more stable. I guess it’s really more of a frosting than a creme or a marshmallow but somehow doesn’t add too much to the cookies but they okay. Ethan described these as “inoffensive”. 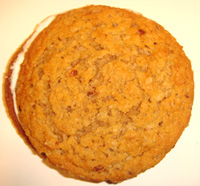 Mrs. F’s cookies were a little bit dryer, although in comparison to Lil’ D’s ultral moist and slightly oily cookies, this wasn’t a surprise. Also the texture and taste were more “oatmealy” and there was more creme that had a bit more vanilla flavor to it. Ethan said these tasted “more honest” and I agreed that these provided at least more of an illusion of eating an actual oatmeal cookie.

Wrap up:
Mrs. Freshly wins this round bringing the score on this blog to her winning two out of three Little Debbie/Mrs. Freshly battles. I really thought after the Buddy Bar disappointment Mrs. F would forever be the second-rate snack, but after the donut stick challenge, she proved her self as a worthy opponent and slowly gaining credibility in the snack competitions.