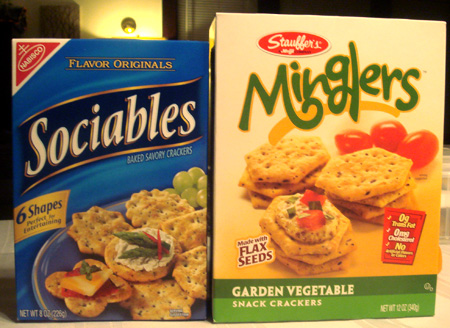 There are a number of products that Stauffer’s seems to copy from Nabisco and Minglers seemed to be inspired by Sociables.  I did notice that they don’t offer the same flavors but I felt the closest match was garden vegetable to the seasoned flavor of sociables.  Both promote a party environment which would be interesting to conduct an evaluation at a social situation but we just tried these at home. 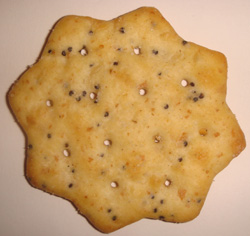 These were kind of bland except for the salt flavor.  We could see the seasoning but Ethan and I felt they tasted similar to Saltines.  We liked the texture though, it was light and sort of flaky.  Overall not a bad cracker. 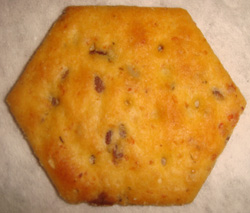 Minglers were a bit toastier looking and much harder in consistency than Sociables.  The taste was a little more flavorful probably from dehydrated vegetable flakes but there was still an absence of any enjoyable flavor.

Wrap up:
Not that we liked them all that much but Sociables win for their flaky texture and mild flavor.  Minglers were too hard and had a weird taste to them.  They weren’t bad when used as a vehicle for dip but on their own they were kind of gross…and didn’t have the variety of shapes Sociables does, which I think suggests a social atmosphere -a variety of something all hanging out together.  Where as Minglers are just the same shape which might suggest “We only mingle with people who look exactly like us”.

10 thoughts on “Sociables vs Minglers”